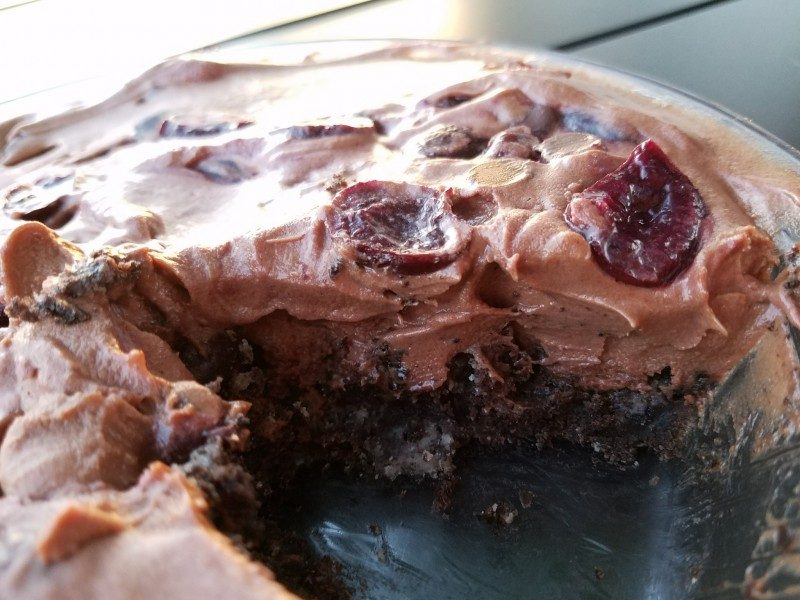 I took this dish over to my cousin’s house for a little family get-together and it was a hit! It was a bit messy to scoop out but it was finger licking good. I made it using a little over 1 cup of cherries but I wish it had more so I increased this recipe to two cups!

Rinse off, halve, and pitt your cherries. Preheat your oven to 400 degrees. In a small bowl, toss halved/pitted cherries with your sugar. Spread the sugar-coated cherries in an even layer on a baking sheet, and stick them in the oven for about 10 minutes. Remove roasted cherries from the oven and set aside. Don’t turn off your oven yet!
Put the Oreo cookies in a ziplock bag and smash them until the cookies are crumbs for the crust. In a small bowl, mix cookie crumbs and melted butter until completely mixed. Press crumbs firmly into the bottom of a 9-inch pie dish. Bake the crust for 10 minutes, then remove and set aside to cool.
While your crust and cherries are cooling,  whip the cream cheese in a large bowl until smooth. In a separate bowl, whip your cream until stiff peaks form. Slowly fold the whipped cream into your cream cheese mixture until the two are completely mixed. Melt all of your chocolate chips and pour them into the cream cheese and whipped cream combo. Add the Nutella and carefully stir until mixed entirely.
Spoon the chocolate cream filling into your pie dish and spread evenly. Top off the pie with the roasted cherries (don’t forget the juice!) and sprinkle some more chocolate chips over the pie. Refrigerate until you are ready to dig in! 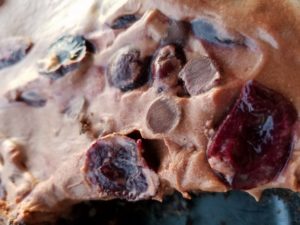 This recipe was adapted from justputzing.com.

Shop
Shop In Person Or Online

About Us
Who We Are